'It is time to end the war on drugs', says top UK police chief 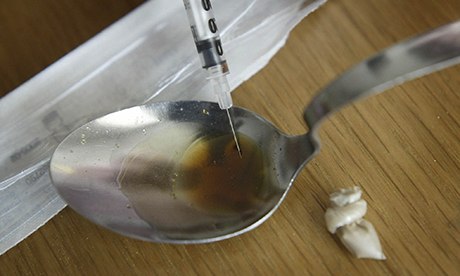 One of England's most senior police officers has called for class-A drugs to be decriminalised and for the policy of outright prohibition to be radically revised.

In a dramatic move that will reignite the debate over the so-called war on drugs, Mike Barton, Durham's chief constable, has suggested that the NHS could supply drugs to addicts, breaking the monopoly and income stream of criminal gangs.

Comparing drugs prohibition to the ban on alcohol in 1920s America that gave rise to Al Capone and the mafia, Barton argues that criminalising the trade in drugs has put billions of pounds into the pockets of criminal gangs.

Drug policy reformers have praised Barton's challenge to the status quo as sensible and courageous.

Writing in the Observer, Barton said: "If an addict were able to access drugs via the NHS or something similar, then they would not have to go out and buy illegal drugs. Buying or being treated with, say, diamorphine is cheap. It's cheap to produce it therapeutically.

"Not all crime gangs raise income through selling drugs, but most of them do in my experience. So offering an alternative route of supply to users cuts their income stream off.

"What I am saying is that drugs should be controlled. They should not, of course, be freely available," Barton wrote.

"I think addiction to anything – drugs, alcohol, gambling, etc – is not a good thing, but outright prohibition hands revenue streams to villains.

"Since 1971 [the Misuse of Drugs Act] prohibition has put billions into the hands of villains who sell adulterated drugs on the streets.

"If you started to give a heroin addict the drug therapeutically, then we would not have the scourge of hepatitis C and Aids spreading among needle users, for instance. I am calling for a controlled environment, not a free-for-all."

Unlike the criminals who supply drugs, Barton said that addicts "must be treated and cared for and encouraged to break the cycle of addiction. They do not need to be criminalised."

Barton contends that decriminalisation and offering an alternative, controlled legal supply would also deal a mortal blow to criminal gangs and dent their image among some young people as glamorous gangsters.

"In my force area we have 43 organised crime groups on our radar. Most have their primary source of income in illicit drug supply, all of them are involved in some way. These criminals are often local heroes and role models for young people who covet their wealth. Decriminalising their commodity will immediately cut off their income stream and destroy their power," Barton said.

Barton is one of the north of England's most experienced crimefighters and has pioneered initiatives to break up criminal networks in County Durham via his force's "Operation Sledgehammer". He also holds the national intelligence portfolio for the Association of Chief Police Officers across the UK. Under his watch as assistant chief constable of Durham prior to his appointment to the top post earlier this year, there was a recorded 14% drop in total crime figures for his region.

Barton joins a small band of senior UK police officers who have demanded a major rethink on drugs prohibition. They, in turn, are joined by the likes of Guatemala's president, Otto Pérez Molina, the entrepreneur Richard Branson, 500 top leading US business figures, the Economist magazine and the Observer in calling for an alternative, including an end to outright prohibition. It is estimated that some $100bn is spent fighting the "war on drugs" each year across the world.

The drugs policy reform group Transform Drugs Policy Foundation praised Barton's stance. Danny Kuschlick of Transform said: "We are delighted to see a serving chief constable who is willing to stand up and tell the truth – prohibition doesn't work. Chief constable Barton demonstrates a responsible attitude to drugs that is so often absent among professionals and political leaders.

"He is that all too rare thing, a man who serves on the frontline, with principles and courage, who supports effective reform that best meets the needs of the communities that he serves. We must hope that this time more of his peers follow his lead."